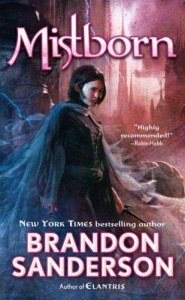 The Final Empire follows a girl named Vin, an orphan street urchin who discovers she has the powers of a Mistborn, and Kelsier, a Mistborn half-skaa who wants to overthrow the Lord Ruler.

I read this over the span of two days, faster than I usually do, probably because it's pretty fast-paced and it has a lot of action, political intrigue, and even some drama. I even stayed up until 1:30 am this morning just to finish it, something I only did before for The Great Hunt.

I liked The Final Empire. It's full of amazing moments where characters get to show off their powers and also slower moments where we get to know the characters better. I liked the characters in this story even if we don't get to see some of them aren't really very well-rounded. The writing is more straightforward, less flowery and lyrical but it does its job to show us the world and the characters.

The worldbuilding and magic system were fantastic. You can see that a lot of effort was put into making a believable world and a magic system that works in a rational way. Allomancy and Feruchemy have to be the most original magic systems I've encountered thus far. I can vividly picture the world in my mind along with the characters and their actions.

Some of the characters felt a bit flat and some scenes seemed to go by too quickly (hence the 4-star rating) but overall, the book was enjoyable Vin's character development is amazing and I loved seeing her become a powerful Mistborn, learn political intrigue, and how to trust her friends. Vin definitely has trust issues and I liked seeing her try to trust others more. Also, I'm going to admit to being a sap and loving Disney-style romances featuring good boys who love books (I don't like bad boys). That said, that particular subplot wasn't really the highlight of the story and I appreciate it. As much as I missed reading books with romance, books that have the plot take a backseat to romance wasn't cutting it.

The highlight of this story, for me, is the skaa rebellion. It goes by pretty fast and in some parts, I was confused by how quickly it went by, but I guess I can understand it. There's a lot of political stuff going on, more than I'm used to but I love it. I actually prefer my epic fantasy to have well-thought-out political systems. If I could see a functional legal system backed by logic and political theory, I'd have my perfect book. Still, this one is good and I liked seeing Vin and Kelsier try to navigate the politics and machinations of the noble families in order to succeed. I'll admit though, I think that Kelsier's actions were very drastic by the end and the way he does it was pretty surprising. suppose I could understand somewhat since he seemed to be setting it up for some time. There were some twists in this book that can be easy to predict, but it doesn't really matter to me. I don't usually care so much about twists than I do about an interesting plot.

The way the story concludes would almost make you think that this book is standalone. There are two more books in the series that might answer my questions and let me spend more time with characters I've grown to love. I'll have to wait before reading it though since I might still need more time to fully digest the story. Still, I liked The Final Empire and I will definitely be continuing with the series. Will I read more books in the Cosmere? Yes.

This book is highly recommended for fantasy fans, people who like worldbuilding and magic systems, and people trying to get into adult fantasy after young adult fantasy.

This review is also at The Bookworm Daydreamer
Tweet